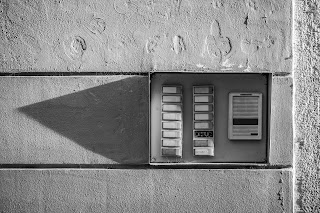 I rang the bell and waited. Nothing. I was reminded of a similar situation about 2 years back when I'd arrived at an office and rung a small black bell which was connected to the company logo with a giant arrow. I rang it twice and eventually a woman appeared and told me there was no need to ring the bell, I should have just walked straight in ('someone should do something about that giant arrow then,' I remembered thinking at the time).
So here I was again. Waiting in front of another small black doorbell. 'Once bitten, twice shy', I thought to myself and I pushed the door open. Another door stood in front of me and a man was exiting. He held the door and I thanked him and walked in. It was a small office, barely enough room to swing a cat with two chairs in front of me and two more to my right beside a hatstand. On a table to the left stood the ubiquitous bottle of disinfectant. Covid.
A woman appeared in front of me and I knew she worked there that way that you can just sense someone belongs to a place. She frowned at me, but I was already explaining my presence.
"Guten Tag, ich habe einen Ter...."
"How did you get in?" She looked questioningly at me. I motioned to the door behind me and began to explain that it was open.
"You're not supposed to walk in. You're supposed to wait until someone answers the doorbell." The matter-of-fact way in which she said this bothered me particularly as the event from 2 years previous sat simmering in the forefront of my mind.
"Well, I know for next time." I said out loud. Damned if you do and damned if you don't.
notes on the text
1. remind versus remember
Remind is when someone else or something makes you think of a person, situation etc.
Remember is when you yourself think of a person or situation etc.
Examples: Remind me to buy bread on my way home. If you don't, I'll forget again!
I remember him! We lived on the same street as kids!
2. eventually   this means 'finally', 'in the end' and indicates a desirable or expected outcome to a situation; it doesn't mean 'maybe'
3. to be supposed to   to be expected to
expressions
1. once bitten, twice shy - when you want to say that someone won't carry out an action because of a bad experience with the same action in the past
2. not enough room to swing a cat - indicates that an area is very small
3. damned if you do and damned if you don't - indicates that you will be wrong whatever choice you make
*photo by Michal Matlon on Unsplash