A man crossing the street approached to ask me a question. "Eshmm hummm gartz?" he said. "The podcasters in my ear grew fainter as I removed the earphone in preparation for when I'd ask him to repeat himself, inevitably. 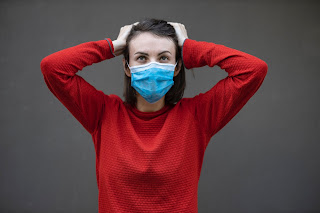 Photo by Engin Akyurt on Unsplash

"Eshmm hummm gartz?" he said calmly. At least one of us had patience. With one hand on the buggy and the other straining to rein in my inquisitive dog, I was quickly losing mine. And now, to cap it all, I had to decode muffled gibberish. "I don't know. I think it's there." I motioned him to a doctor's surgery just behind me. I was taking a stab at a suitable reply and seemed to have hit the mark. I heard a "danke!" before I manoeuvred both dog and buggy around a tree and back onto the path.

It was a cold morning and the lost stranger had his scarf covering half his face as a result. Or so I assume. It may have been a makeshift mask. Either way, the scenario reminded me of the latest difficulty on my journey to master (lol, I really just mean 'learn') German. For the last few months in my part of the world the wearing of a face covering has been mandatory in certain situations and particularly where social distancing is not possible. Now, before I go any further I need to make it perfectly clear that I am 100% in favour of this measure and do not for a moment resent having to wear a mask, no matter how much my nose starts to itch or how strong the desire to sneeze as soon as I put one on. The downside of them, however, is how much trickier they make comprehension.

Mask wearers can join my list of 'difficult-to-understand people and situations' along with small children and phone calls. That seemingly innocuous little piece of material suddenly muffles each sound causing my brain to panic and convince itself it simply will not be able to grasp what's been said resulting in frequent "Wie, bitte?"s and polite laughter. Lots of polite laughter, and hasty retreats. It creates a vicious cycle: I don't catch what someone says, so I ask them to repeat it identifying me as a non-native, which instantaneously lowers my confidence causing me to mumble, so then they don't understand me.... and sometimes it all gets too much!

Perhaps I should ask my teachers to wear masks from now on so that I can adapt and improve. I'm not sure how they'd feel about that. I'm pretty sure mask wearing for online lessons is redundant ...

Words from the text
fainter  weaker
buggy  a chair with wheels for transporting babies
rein in   to control
cap it all   to add the finishing touch, to add sth to a list of (usually bad) things or events
gibberish  words that don't make sense
take a stab at   to make an attempt, try
makeshift   something that's used temporarily because the proper object is not available
social distancing   keeping a safe distance from others to prevent the spread of disease
seemingly innocuous   appearing to be harmless
muffles  makes unclear and difficult to understand
hasty retreat   quickly moving away from something
mumble  speak quietly and unclearly
redundant   unnecessary