What's in a name?

My name? Of course, it's ... Yea, I mean, that's an easy question. Of course I know the answer to that one. I know lots of answers to that question. I'm just not sure which one to give. 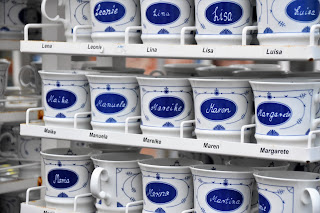 It's the little things, isn't it? "Can I take your name?" asks the hairdresser/restaurant manager/call centre agent and all your life you answer the same way: Tracey (for you it'll most likely be different.) Then you move abroad and many things are done a little differently. "What is your name?" in Germany means my surname if I don't want things arriving at my door addressed to Ms. Tracey. So these days I give my surname, by itself, nothing in front of it. And that, to me, feels weird.

When I was growing up only the boys were called by their surnames. Adults were Mrs. Reilly this and Mr. Kennedy that. Surnames were for barking at people who'd angered you as in "Higgins! Come here now!" As a very well-mannered girl I can assure you that my surname was never used in this way, nor did I use it to introduce myself, unless my first name was there, too ... first, as the word suggests.

Because introducing myself by surname alone feels so... icky, for want of a better word, I even once stuck 'Frau' in front of it and then immediately regretted it. Would my interlocutor think I was being self-important? As I write about it now I can feel my nose scrunch up in response to the unpleasantness of the memory. Evidently that's exactly what he thought because despite my discreet and repeated encouragements to call me otherwise, this man, who's about my age, continues to use my 'title'.

I think this whole problem started back before I'd realised you are supposed to offer your surname immediately after Guten Tag when making phone calls. Putting aside for the moment the fact that I find this custom very odd, (what's the point when they don't know me from Eve?!) I have even been admonished for not following protocol, which I'm sure you'll agree is an unwanted additional stress to the anxiety-inducing act of using the telephone in another language.

How many years till this feels normal? I often wonder. And not for the first time.

Picture by Waldemar Brandt on Unsplash

words from the article

.. this and … that  used to give vague examples (Also as in: What have you been up to? – Oh, this and that.)
icky  distasteful
for want of a better word  when you’ve used a word but feel that it’s not exactly the word you mean
Frau
interlocutor  the person you’re speaking to
scrunch up  squeeze / make smaller
to do otherwise  to not do something or do the opposite of it
Guten Tag  hello in German
don’t know me from Eve  originally ‘from Adam’. Eve was his much-maligned partner. This is the uncommon but female version for saying that someone didn’t know you at all
admonish  tell someone off / speak to someone seriously when they’ve done something wrong